Bailey began swing dancing in 2012, and has been teaching since 2015. She studied Theatre and English education at WWU, and teaching is her passion. She loves sharing her joy for dance with her students and brings a fun and inviting feel to her classes. Bailey has traveled to learn and teach internationally, and loves bringing what she learns back to Bellingham. She teaches swing dancing in a way that makes it accessible to anyone willing to learn, and encourages her students to find their own groove and style. 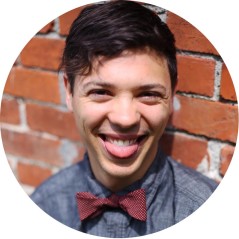 Damian began his dance training in the winter of 2008. His first and true love is Swing Dance; Lindy Hop, Charleston, Solo Jazz, and Balboa are permanent residents in his heart. He studied Modern Dance at the University of Washington where he received his dance minor in 2011. Since then he has continued his swing dance education at regional events, and has competed both nationally and internationally. Damian has been teaching for events and workshops since 2009, and locally at various studios in Bellingham since December 2015.

If you’re interested in taking private lessons, send an e-mail to bham.hop@gmail.com to inquire/schedule.